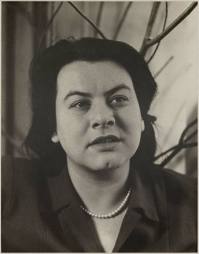 Over the span of five decades, the Jewish-American poet Muriel Rukeyser (1913-1980) produced a work of stunning breadth and versatility. Her poetry responded to the struggles of the 20th century as they were unfolding before her eyes: World War Two, the Holocaust, the Cold War and McCarthy years, the Vietnam War, the renewal of radicalism in the 1960s, the women’s liberation movement of the late ‘60s and ‘70s, and, throughout, the struggles of disenfranchised people for survival and recognition. Rukeyser’s immense curiosity about life knew no bounds: in poetic and prose works she engaged with technology (“Theory of Flight” 1935); mythology and religion (Book of the Dead 1939, Ajanta 1944); science (biographies of scientist Willard Gibbs and Renaissance astronomer Thomas Hariot); art—visual and musical (“Waterlily Fire” 1962, “Ives,” “Houdini—a musical”); labor activism (Ann Burlak); Judaism (Akiba, “To be a Jew in the Twentieth-Century); the struggles of international writers (South Korean poet Kim Chi Ha); and always history. She also wrote The Life of Poetry, a central work of twentieth-century poetics.