My bio on the homepage for “Muriel Rukeyser: A Living Archive” states that I just completed a novel partly inspired by The Book of the Dead, and I wanted to use this post to relate how Rukeyser’s poetry has influenced my creative work. Back in undergrad at St. John’s University, I was lucky enough to be able to do volunteer work at the Minnesota Correctional Facility in St. Cloud, an institution with a very unique history.

Most of my initial knowledge was word-of-mouth, and it disturbed me in a gut-level way that I found difficult to articulate. Pulling up to the mammoth structure, you can’t help but admire the prison wall – the largest granite wall in the world (other than some sections of the Great Wall of China), I’ve heard from questionable sources. Whether or not it belongs in the Guinness Book, the wall is three feet wide at the top, four feet at the base, and a mile and a half long. What’s truly interesting is that it was built by prisoners from granite mined within the prison yard. St. Cloud’s nickname is Granite City, and the Breen and Young Quarry was the very first to be established in Minnesota, this back in 1868. Twenty years later, the state purchased 240 acres of land, which included the Breen and Young, for the purpose of building what would become the St. Cloud State Reformatory.

I don’t have a date for when they stopped using inmate labor in the quarry, but eventually the hollowed land suffered the same fate as any abandoned quarry; it filled with rainwater. The resulting body of water is not the same as a normal lake. In addition to its great depth in proportion to its breadth, something about the granite prevents algae and other plant life from growing in the water. As I found on swimming trips in college to other quarries, the water is cold, and you can see a great distance into its depths. Perhaps if you stood on the edge of the Breen and Young, you could see the steam-powered derrick they abandoned at the bottom of the quarry. It might even be the light-colored “island” in this Google Earth photograph of the yard: 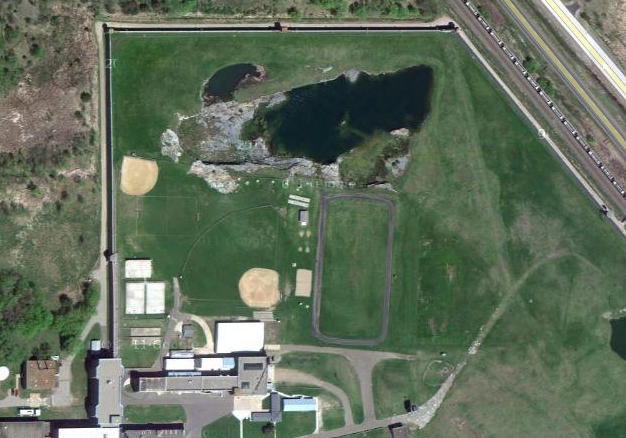 It wasn’t until I read Rukeyser’s The Book of the Dead in graduate school at Eastern Michigan University that I began to gather a means to express what bothered me so much about the Breen and Young. Rukeyser, I felt, surveyed the Hawk’s Nest Tunnel Disaster, and the actual land where it played out, with a similar feeling of horror – which she expresses most abstractly but urgently in what I like to call the “industrial trilogy” of “Alloy,” “Power,” and “The Dam.” Try to keep the above image in mind during these words from “Alloy”:

Forced through this crucible: a million men.
Above this pasture, the highway passes those
who curse the air, breathing their fear again.

The roaring flowers of the chimney-stacks
less poison, at their lips in fire, than this
dust that is blown from off the field of glass;

blows and will blow, rising over the mills,
crystallized and beyond the fierce corrosion
disintegrated angel upon these hills.

In my third post, my open letter to the objective correlative, I quoted from Shoshana Wechsler’s essay “A Ma(t)ter of Fact and Vision: The Objectivity Question and Muriel Rukeyser’s The Book of the Dead,” a quote that might help explain what nagged at Rukeyser’s mind and continues to nag at mine:

For the scientific observer as for the poet, what is important is the overriding fact, and fate, of invisibility – the invisibility of occupational disease and its ravages, the social invisibility of a mostly black, marginalized labor force – which led to the laborers’ brutal exploitation and death as well as their erasure from memory. The submerged tunnel neatly lends itself as the perfect objective correlative for Union Carbide’s corporate obfuscation.

And maybe comparing Wechsler’s observations about the submerged tunnel and my uncanny vibes from the submerged crane give me another perspective on the objective correlative, one that gets at Elisabeth’s comment on my objective correlative post; namely, that these compounding images hit us on a pre-rational level, a feeling that further research and examination sometimes uphold.

For, back when I first heard about the Breen and Young, it bothered me solely in an abstract way. I didn’t yet know about silicosis, didn’t consider that the conditions for inmate labor in the late 1800s probably weren’t better than those at Hawk’s Nest. While the work of Rukeyser and others has preserved the tragedy in West Virginia, I haven’t been able to find any real research regarding the inmate workers at the Breen and Young site. Perhaps you think that this is where I, Joe Sacksteder, sweep in and devote my life to resurrecting this history. Alas, my aspirations are that of a cowardly novelist, and it was far simpler to fabricate an exaggeration of what the history might have entailed… you know, so that responsible researchers might become interested and do the real work.

The current novel I’m shopping around revels in the horror film convention of what I call the “research montage,” that moment three-quarters of the way through many horror films where the protagonists have to figure out what event from the past is continuing to plague them. My version of the Breen and Young became the historical locus of my characters’ research, the root of evil. But the real horror story would be the actual truth, the evidence itself – and that’s the power of objectivist literature at its best.